You can get back up again 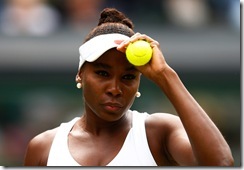 The godly may trip seven times, but they will get up again. Proverbs 24:15

I am a huge admirer of tennis star Venus Williams. For in spite of the many times she falls short in her quest to win a major tennis championship, she always finds a way to get back up again.

In 1994, after bursting on the professional tennis scene, she became the world’s No. 1 tennis player, the first African American woman to do so, after winning seven Grand Slam titles and an Olympic gold medal in singles play.

But in 1998, an expected foe arrived for Venus on the tennis circuit in the form of her sister, Serena Williams. Initially winning most of the Grand Slam tournaments during the early years when they played against each other, Serena began to overpower and outplay her older sister, causing Venus to lose every Grand Slam final she played against Serena between the years of 2002-2009.

To add insult to injury, in 2011, Venus was diagnosed with Sjogren’s syndrome, an autoimmune disease that left her fatigued and experiencing joint and muscle pain, and she made the difficult decision to stop playing professional tennis. But two years later, after a change in diet and her training schedule,she returned to the tennis circuit and won another woman’s singles title.

Venus continued to play professionally until she powered her way back to Wimbledon’s Center Court this past July, and then advanced to the semifinals of the U.S. Open in early September. Falling short again of winning the coveted Grand Slam title at both events, when asked if she would retire after her losses, Venus graciously replied: ” It’s nothing complicated. I will continue to play tennis.”

Sometimes you’ll find yourself knocked down by the sting of rejection when submitting your work as an aspiring writer. But no matter how many times your work is rejected, like the tenacious Venus Williams, get back up again.

This entry was posted in Conquering the land of writing for ministry and tagged Daily wisdom for writers. Bookmark the permalink.